Imagine yourself eating lunch today at noon.  You continue your work until it’s time to go home at 5:00, eat some dinner with the family, catch a movie at the Linway Plaza (after all… it is Friday.  However, upon further inspection, there really isn’t much worth watching at the movies right now), put the kids to bed, and get 9 hours of sleep.  Now, right about the time you wake up, imagine yourself having spent the entire past 20 hours exercising; from lunch until waking up!  That’s exactly what our Tough Mudders were up to last Friday, except they began their workout at 7:00 rather than noon.

I wanted to grab a little video and some photos this time around, but unfortunately did not have the time available to workout with them on Saturday morning like I had planned.  So, I met them at their first stop; Ox Bow Park.  Basically, their goal was to mimic as best as they could the event they’ll be racing in November.  They’d run to a park, practice some strength, balance, and obstacle exercises, and the continue running on to the next park they had mapped out.  This continued on all the way from the parking lot at Meijer (across from Ox Bow Park) to Crossfit Michiana, and then they worked their way back again.  They even strategically prepared a stop where they could don themselves in wetsuits, and traverse in and out of the Elkhart River to get used to wearing them sopping wet and cold.  They gained some valuable insight by doing this.  They now know to use much more lubrication on the inside of the wetsuits to cut down on chaffing.

All in all, they ended up with about 30 miles of total running, 12 separate park workouts, and a 1.5 hour workout with Crossfit Michiana.  They did have a few guys join them for their workout.  A gentleman from Chicago who will also be competing at the World’s Toughest Mudder event as an individual (whose name happens to escape me), and young man by the name of Jed Garber.  The guys all agreed that their fellow Mudder was a beast, and should be very competitive in the event.  Jed joined the team for two separate workouts, and even brought Gatorade for the guys to enjoy.  I am sure that 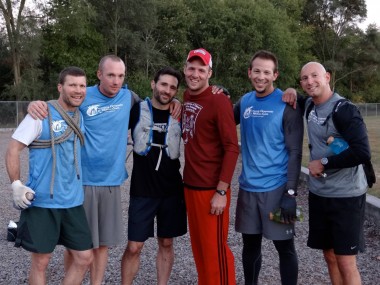 brought much needed encouragement to them in what had to seem like a never ending workout.  Jed also was awarded a free 60 minute massage here at CCWC for being the toughest person to join the guys during their workout (ok,so he was also the only one to do so (Chicago Mudder didn’t count)).

Believe it or not, they plan to better that workout with an even longer one; a “dress rehearsal” sort of speak.  There is a course in Illinois they are hoping to obtain permission from that they can rent for a full 24 hours in which they can do a practice run on actual obstacles, mud, and water similar to what they will be competing in.  If you’d like to get a better idea for what these guys will be experiencing in a couple of months, take a look at this video!  Yes, it’s intense (and keep in mind this video is only showing the obstacles and does not include the miles of running in between them.  It’s also only a single lap.  Our team is hoping to complete 7 laps in 24 hours)

!  As always, we will keep you posted on their progress, training, and eventually their result at the World’s Toughest Mudder.