If you followed our blog last year, you probably know about the Tough Mudder team we sponsored that competed in the World’s Toughest Mudder held in New Jersey in November. However, you probably don’t know the whole story!  Watch this video to learn more about how they decided to do it to begin with, challenges along the way, and how they impacted the lives of 10 young girls. 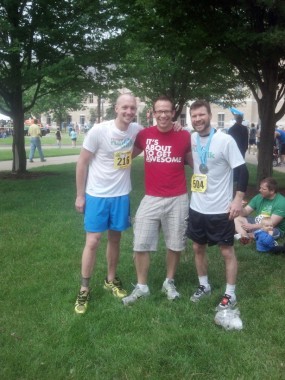 So, how do you train for an event like that?  I imagine there is no exact right way to go about preparing your mind/body for 24 hours of pain and endurance.  I will be keeping you posted on how our team is getting on in their training.  Recently, two of the four Mudders participated in the Sunburst Marathon in South Bend (the other two were nursing injuries they acquired through their training).  Now, I myself do some running.  The longest I’ve ever run without stopping is about 9.5 miles.  My legs felt like jello by the end of it.  You can see why this would be a good event to participate in when training for a 24 hour race; END_OF_DOCUMENT_TOKEN_TO_BE_REPLACED

Last week we informed you that we are the proud sponsors of a team of four men that will be competing in the World’s Toughest Mudder.  Now, it’s time to get to know them!  First up is Kevin.
Name: Kevin Castetter
DOB: 02/24/1982   Age: 31
Tough Mudder nickname: The Gazelle
Profession: Critical Care Nurse at IU Health – Goshen and Parkview Regional Medical Center – Ft. Wayne
Family: Wife-Heidi, Children-Kyler (age: 3) and Karsten (age:1)
Running: Marathons x5 (Chicago x3, Detroit, Cleveland), Tough Mudders x3, 2012 Toys for Tots Marine Mud Run – Overall 1st place
Testimony:  My parents divorced when I was young, and I attended a Methodist church with my mother and siblings.  I was baptized at a young age and completed confirmation classes during middle school.  I committed my life to Christ during my middle school years while at church camp.  I was successful academically and athletically during high school even though I was surrounding myself with negative influences who encouraged poor decision making.  I take full responsibility for this.  I fell farther away from the Lord during college until I met my wife, Heidi, while attending Ball State University.  My parents each remarried with both getting divorced for a second time during my time at college.  I began attending church more frequently with Heidi as the style of service drew my interest.  We eventually married and began attending Warsaw Community Church.  We purchased our first home in Millersburg in April of 2008 and shortly thereafter found our way to Grace Community Church.  I recommitted my life to Christ on February 26, 2011 in an Epworth Forest chapel during a END_OF_DOCUMENT_TOKEN_TO_BE_REPLACED
Share this:

I received some help during that time from my brother-in-law.  He was a cross country and track runner in high school, and is currently coaching both sports at his alma mater; West Noble HS.  He oozes runner.  Anytime someone calls me a runner, I quickly remind them that just because I run, it doesn’t make me a runner.  He’s always trying to get me to sign up for 5k’s or half marathons.  I’ll admit, I have considered it, but only briefly.  I simply have a hard time justifying spending money to do something that I can do for free anytime I want.  $20 to run 3.1 miles?  No thanks.  I’ll pass.  However, over the last several years, there has been a new type of event gaining popularity.  Have you ever heard of the Tough Mudder, The Spartan Run, The Warrior Dash, GoRuck Race (the list goes on.  I told you it was getting popular didn’t I)?  Imagine an off road race, but with varying obstacles thrown in to challenge your strength, endurance, and toughness.  That is what all of these events are about.  They include everything from wall climbs, to ice baths, to mud slides, to electrocution (yep, you read that correctly).  Now that’s what I’m talking about!  I CAN’T do that anytime I want for free.  That’s something I’d pay money to do.  Jump off a END_OF_DOCUMENT_TOKEN_TO_BE_REPLACED 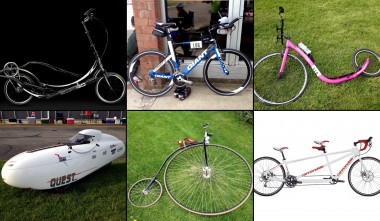 We showed up at the school where the event start/finish was, and there were cyclists everywhere; and every kind of cyclist you can think of (or maybe haven’t thought of).  I’m pretty used to getting funny looks riding around on the Elliptigo, but check out some of the other classifications of bikes that were represented.  There are two stages to this event.  First, there is the 50.5 mile loop.  Once that is END_OF_DOCUMENT_TOKEN_TO_BE_REPLACED