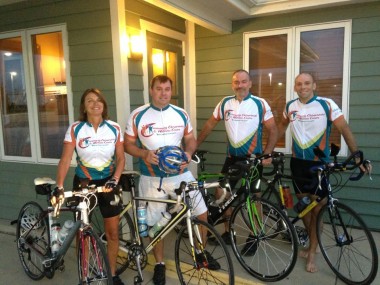 vehicle that will be stopping to check on you several hours down the road, and then a separate vehicle bringing you back.  So, I threw a few Clif Bars in my Jersey, a zip lock bag in case it rained (for keeping my phone dry), and a few rubber bands.  You never know when you might need them.  I meant to put a fresh change of bike clothes in my mom’s van so I could change if the day wound up getting hotter than expected.  Unfortunately, I forgot and it ended up at my office instead.  With the bikes loaded and our minds wondering what we may have forgotten (you know the feeling), we took off for Community Chiropractic & Wellness Center in Shipshewana, IN; the official start of our journey.  Doc was already there getting his water bottles filled, tires pumped up, and making sure his street clothes for the ride home were loaded into his truck; the vehicle which would be bringing us back.  Tanya (Doc’s sister) arrived minutes after we did.  It was roughly 6:40 when we took a group photo at mile 0.  We had 148 miles to go,and 1 day to do it.

6:45.  As we clipped into our pedals for the first time that day, there were a few things entering the back of my mind.  “Are we stupid foreven attempting this?”  “How many flat tires will we have?”  “Was the route I chose a good/safe one, or would we be 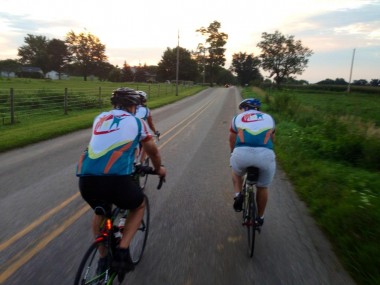 left for dead somewhere on the side of the road?”  You know, questions like that.  It was mile 2 and the sun was peaking it’s head over the horizon, greeting us with a smile.  It was a beautiful morning!

We wanted to give anyone interested the chance to follow our progress throughout the day, which is why we made a point to stop every 25 miles to take a photograph.  Mentally, it was nice breaking up the ride in segments likes this;

knowing that after our first 25 mile photo, we were already 1/6 of the way to our destination.  For some reason, 6 twenty-fives seems like a lot less than 150.  I think most of us would agree that the first third of our ride was the most beautiful.  It wasn’t only due to the fact that the morning light casts longer shadows, and the air is much cooler, but we had some beautiful rolling hills, mostly smooth roads, and nary a car passed us until we hopped onto US 20 to ride through Angola. We thought about stopping for breakfast, but at this point, we were only 33 miles in, and thought we should at least get to 50 before a more lengthy break. 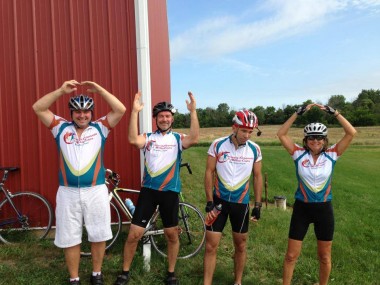 Shortly after entering Ohio, we reached mile 50.  There happened to be a farm on our left with the owner working on his backhoe.  We figured this would be as good a place to stop as any, and a few of us were getting low on water at this point, so we could replenish our supplies as well.  We did need to take a photograph, and since the nice man was willing, we had him do it for us.  We did just enter Ohio, so I was willing to participate, but I wasn’t going to be excited about it.  For you sports fans out there, you’ll recognize this photograph as the “Hi, I’m an obnoxious Ohio State football fan, and I’m going to spell things out with my body and arms whether I’m in Pakistan, California, or Ohio.”  You see, I am a fan of the far superior University of Michigan Wolverines.  We just don’t feel the need to grab 7 of our friends to spell out our state everywhere we go.

We were starting to get a little hungry.  Clif bars and Chomp chews weren’t cutting it anymore.  So, we stopped the small town of Montpelier for a late breakfast / early lunch.  The owner was friendly, and we were able to enjoy an outdoor patio while we ate.  We all enjoyed our meals, and we each enjoyed some of Tanya’s pancakes.  She was the hungriest of us all, but somehow only managed to eat about 6 bites of food 🙂  This was also the first opportunity we had to restock on energy bars.  My mom arrived at the restaurant once we had finished eating, and we were shortly on our way again.  There’s something comforting about a seeing a familiar face when you are far from home.  Thanks mom! (on a side note…at this point in the day, my mother had her arm in a sling.  Earlier that morning, she fell going down our stairway. 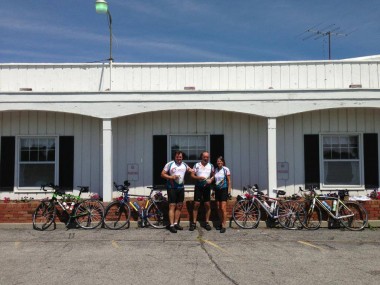 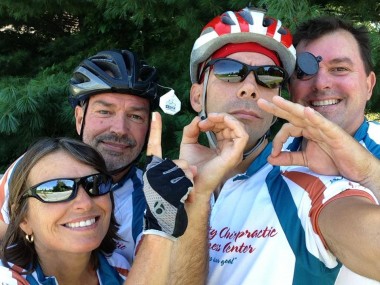 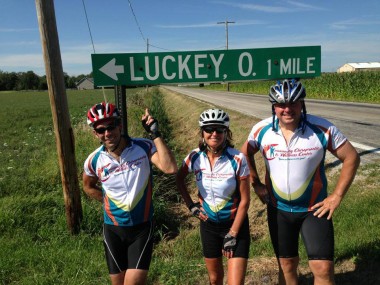 The good doctors at CCWC were able to get digital x-rays of her arm and take care of her.  Thankfully, it wasn’t too serious, but she was in a lot of pain the rest of the day.)

I love it when things just work out so perfectly.  As we approached mile 75, the half-way point, there just happened to be a Nafzigger’s Ice Cream shoppe right there.  Well, since we had to stop and take a photo, why not get a little ice cream too?  First of all, the ice cream was excellent!  However, if you are the type of person who pays attention to details, you may notice something missing in this photograph from the others.  Where are Doc’s white shorts!?  As a testament to his weight loss, he decided to shed the shorts at this stop.  He took them off, folded them nicely, and layed them on the brick ledge of the ice cream store for someone else to pick up and enjoy (if it’s possible to enjoy a free pair of sweaty shorts).  Those same shorts that fit him at 285 pounds back in January, had simply gotten too baggy on him weighing 55 pounds less.  This was also roughly the time that the wind began to shift from the southwest; a welcome friend to help nudge us along.

We reached our 100 mile marker shortly before arriving at the town of Whitehouse.  My father has a friend there who owns a bike shop of his own called Cycle Werks, which is where we stopped to say “Hi” and fill up our water bottles.  This was a great little town, with a nice bike path going right through it.  Unfortunately, the path headed straight towards Toledo, and we were needing to go south of Toledo, so we weren’t able to use it.  My mom met us again, this time in the small town of Waterville.  I have to say, one of the greatest things about taking lesser traveled roads through our country are the small towns you get to see along the way.  Waterville was probably my favorite!  It had tons of historic character and charm, as well as a bridge we crossed over the Maumee River.  At this point of the trip, I was starting to get into some familiar territory.  My sister used to live in Perrysburg which isn’t far from Waterville.  And where there is familiarity, one can find comfort.  I began feeling like we were on the home stretch.

Mile 125.  The last 25 mile stop.  We had just passed through the small town of Luckey, and we were feeling a little lucky, since up to this point we had not experienced a single flat tire, or any problems with our bikes for that matter.  About the only issues we began dealing with were some cramped muscles.  It’s extremely important you take in enough water on an adventure like this.  I am not sure what the total was, but I know Doc had to have filled up both of his 21 oz. bottles 5 times or more.  For those of you doing the math in your heads, that’s over 1.5 gallons of water that Doc drank all by himself!

Although we didn’t have much more than 10 miles to the finish, our route took us right past one of my dad’s two bike shops that he owns; Elmore Cycle & Fitness.  Naturally, we stopped (you almost look for any excuse to stop at this point).  This is the point where we were able to get on a “rails to trails” bike path that would take us past my hometown of Lindsey, and into Fremont.  As the path spit us out on the west side of town, we had roughly 2.5 miles left.  Even though we had spent a ton of energy up to this point, I felt a surge of energy just knowing we were so close, and the chances of us finishing were looking pretty good.  I gave a good quarter mile sprint to Fremont Cycle & Fitness; our final destination!  Not long after, Dan and Doc rolled in, followed by Tanya.  We took one last team photo simply to prove we were still alive, and had accomplished our goal!

By the time it was all said and done, we had almost exactly 9 hours of total ride time in (plus stops), averaging 16.5 mph.  We left Shipshe at 6:45 am and arrived at the bike shop at 6:45 pm.  We celebrated with showers at my parent’s house, followed by dinner at Rayz in Genoa.

Thank you Juli and Sarah for driving to OH to bring us back!  Mom, thank you for checking on us along the way!  Dad and Tanya, it was great having you with us!  The conversation and company made the miles fly by!  Doc, I’m proud of you!  You’ve come a long way in just over 7 months, and this was a huge milestone for you.  It’s been great seeing you even push yourself harder since the ride.  I know you can reach your goal of 195 pounds by the end of the year.  Keep working hard! 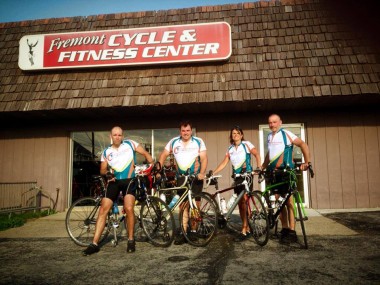