New Kid on the Block

We are proud to announce that we are carrying Encompass Nutrients in all three of our CCWC locations (Lagrange office to open on April 15th)!  If you have never quite known what dietary supplements to take, because there are so many products out there, then look no further!  There seems to be an endless amount of supplements available these days.  You could literally spend hundreds of dollars every month to try to give your body the nutrition it needs in order to fill in the gaps of your diet.  Some of the major or more popular ones are multivitamins, probiotics, fish oil, and super greens.  If you’ve ever wondered to yourself, “why doesn’t someone just make one pill that has all of that in it”, you would’t be the first.  However, it’s about time one company finally did something about it!

Encompass Nutrients is a new company that decided to ahead and simplify the dietary supplement market with what they call an “All-in-One Nutrient”.  They have combined 19 vitamins & minerals, probiotic, Omega-3 fish oil, and their own proprietary blend of Super Green Whole Foods.  Their product is called Complete Adult, and Dr. Holley in our Millersburg office says “It’s going to change the way we prescribe nutrients!”  They have also developed a Joint formula which is meant to be a companion to Complete Adult.  Together, they make quite the pair, and Dr. Waggoner believes so strongly in it that he prescribes it to every patient of his over the age of 15!  It’s beneficial for everyone, and you’ll not only feel better physically, but also  knowing that you are saving time and money!  A two month supply of Complete Adult only runs $35 and Joint Health only runs $20 for a two month supply as well. 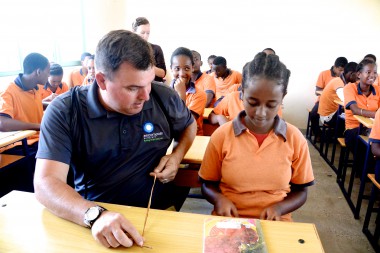 But wait!  There’s actually even more good news.  Encompass has not only provided us with an amazing product to offer our patients, but they also have an awesome mission!  They are committed to giving 80% of their profits to care for orphans around the world!  So, you’re not only improving your wellness, but you’re also taking part in giving back to a great cause!  That’s why their tag line is, “Building Health. Giving Hope.”  They exist for a great purpose.

What are you waiting for?! You can either stop in to any of our offices to pick up your Encompass Nutrients or purchase directly from their website.  We believe so much in what they are doing, we really don’t care if you buy from them directly or from us.  Everybody wins! 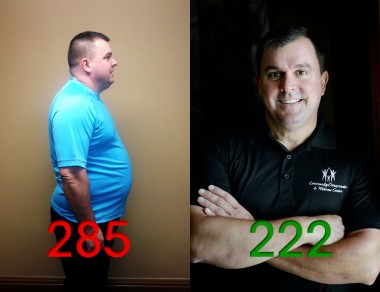 So, now that 2013 has come and gone, how did Doc do?  I had hoped to show you a time-lapse video of his weight loss using weekly photos we had taken.  Unfortunately, we stopped taking that half-way through the year, so that didn’t work out.  I would say that 2013 was both a success and a failure for Dr. END_OF_DOCUMENT_TOKEN_TO_BE_REPLACED

Our bodies function well when these two are in proper balance with each other.   When out of balance, acid forms and our bodies become inflamed.

Take eggs for example.  Do you think there is a difference between farm eggs and supermarket eggs?

They look different & taste different!  And yes, the ratio of omega 3 to 6 omega is way different! 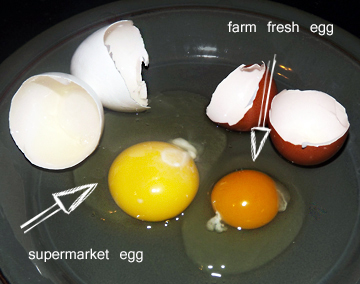 Range fed eggs have a ratio of 1.5 Omega 6 to every one Omega 3, whereas the “supermarket egg” has a ratio of 20 to one.

So, the next time you need eggs, you should reconsider where you purchase them for the sake of your own body.
Share this: 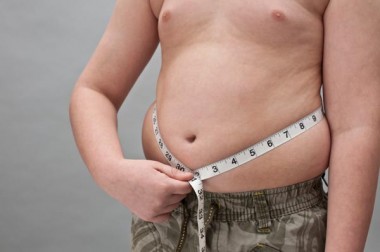 As you read this, you may be thinking, “Man, I’m glad I’m not obese.  I may be a tad overweight, but definitely not obese!”  Not to be the bearer of bad news, but there’s a good chance you’re wrong (at this point, you may also be thinking…”This guy is a real jerk!”.  Maybe, but like most things, you can’t expect to begin solving a problem unless you know you have one.  Getting the facts is more important than maintaining happy feelings).  Let me give you an example of what I’m talking about.  I am 5′ 10″ in height.  My current weight is 157 pounds.  That gives me a Body Mass Index of 22.5.  That puts me in the upper half of the normal range (18.5 – 24.9).  Instead of calling it “normal”, let’s say I’m in the range of where I should be.  Let’s face it, obesity has quickly become the norm, so normal isn’t exactly what we are going for here.  Most people that know me would say that I look thin.  I maintain I still have plenty of body fat that I could lose; and here’s my proof.  According to the BMI calculator, I could lose close to 30 pounds more and still be in that healthy weight range for a person of my height (weighing 129 with a BMI of 18.5).  Let’s head the other direction.  How much could I weigh before I am considered overweight?  173 pounds.  And at what point would I be considered obese?  209 pounds.  So…if you are 5′ 10″ and weigh 209 pounds or more…you are considered obese according to the BMI scale.  I have found that much of the problem is that being overweight/obese has become the norm.  So, if someone is on their way to losing weight by shedding the pounds, often they will hear comments like, “You are skinny!”,  “You need to start eating more”, and  “You look great the way you are.”  We live in a society in which people are more concerned for your feelings than for your health and safety.  You may be getting comments like that END_OF_DOCUMENT_TOKEN_TO_BE_REPLACED

Staying Healthy isn’t just about exercise and eating right.  Here are a few suggestions to think about.

1.)  Get at least 6 hours of sleep!  Sleeping is a time when our bodies can heal and rejuvenate.  It is actually one of the most important processes that our bodies use to heal.

2.)  Brush and floss everyday!  Let’s face it; bad breath comes from bacteria in the mouth.  If we don’t “clean out” the bacteria, is is going to continue into our bodies and make us sick.

3.)  Eat nutritiously!  This means trying to eat as “cleanly” as you can.  Limit processed foods and drinks.  Your body will thank you.

4.)  Get some exercise!  At least 30 minutes of exercise a day is great for the health of your body.  Even going for a walk or cleaning the house counts.  So, get moving!

5.)  Get regular chiropractic treatments!  The importance of Chiropractic and health is nothing new.  The nervous system controls every function that our bodies undergo.  Keeping your spine in alignment and your nervous system “clear” will help keep you in good health. 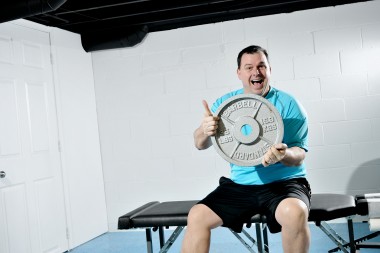 What does it mean to be gluten free?

Gluten is a type of protein found in common cereal grains, wheat, barley, rye, and any foods that
contain these ingredients.  Most people know Celiac disease to be associated with gluten intolerance.

You do not have to be diagnosed with this disease in order to have some degree of gluten sensitivity.
The best way to know if gluten could be causing an issue for you is to try eliminating it from your diet.

Going gluten free at first can be difficult, because it means avoiding all wheat based flours and
END_OF_DOCUMENT_TOKEN_TO_BE_REPLACED